The members of Invermere Deer Protection Society (IDPS) are disappointed the BC Supreme Court dismissed its petition challenging the District of Invermere on urban deer culling, it announced this morning (Oct. 29) in a press release.

The Supreme Court dismissal comes after two “difficult years of work and fundraising to facilitate hearing our public interest trial,” the IDPS noted. “We are a group of ordinary citizens opposed to lethal measures to deal with urban wildlife. Most of the money spent on the lawsuit was donated by local, caring citizens,” explained Devin Kazakoff, president of the society.

“A dismissal, with judgment neither for nor against IDPS, indicates merely that our arguments were considered insufficient. Unfortunately, the judge disallowed two critical response affidavits that severely diminished our arguments,” the press release outlined, adding, “A survey expert wrote that the District of Invermere householder survey was unreliable as a gauge of public opinion. And the second affidavit, of a highly qualified B.C. ungulate biologist, stressed the critical requirement that real science be used in municipal decisions about wildlife management. There is ample case law to stress the importance decisions are based on science.”

Charles Lamphier, IDPS director and long-time Invermere resident said, “The fact these affidavits were not used in court is unfair. But we advise municipalities to continue to acknowledge they are not expert in social or biological sciences and therefore they should step back from unsupported lethal decisions.”
The IDPS stated it is not overly surprised with the decision “but we worry about the future of deer and other wildlife living in our municipalities. The fact that some municipalities have reconsidered and decided not to apply to the province for killing permits is a victory in itself.”

“Grand Forks decided to hold off on culling and do scientific study instead, something every municipality facing deer complaints should be doing,” said Kathy Wilson, member of IDPS.

The IDPS says it will continue advocating and supporting non-lethal deer management through education, research and political action – “to defeat the killing mentality and negative attitudes to wildlife the District of Invermere so vigorously defends.”

Closing its release, the IDPS urges residents to vote ‘no’ in the Nov. 2 poll, tacked onto the referendum asking residents if they favour borrowing $5.6 million for a new community centre.

For more on the IDPS: https://www.facebook.com/InvermereDeerProtectionSociety

Posted by Legislate Kindness at 10:16 PM No comments: 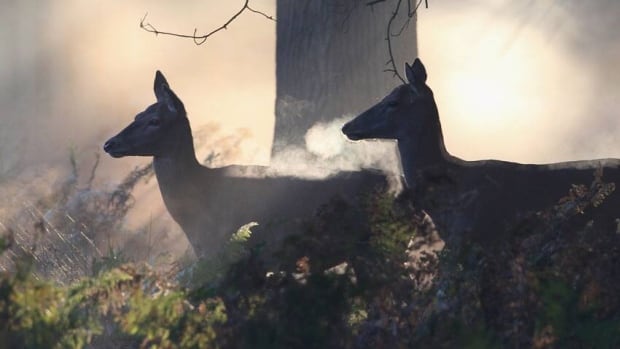 The B.C. Supreme Court ruled today that the District of Invermere followed due process before allowing 19 problem deers to be culled two years ago. (The Canadian Press)

A B.C. Supreme Court judge has ruled against some animal rights activists trying to stop the culling of deer in Invermere, B.C.
The district says aggressive deer are a threat to public safety, but the Invermere Deer Protection Society was arguing the town's council did not consult the community before going ahead with plans to destroy 19 deer two years ago.
Devin Kazakoff, head of the deer protection society, called the court's decision disappointing.
"They've agreed with the district on the fact that they consulted the public. We don't agree with the judge's decision, but that's what it is," he said.
Other B.C. communities had been watching this case closely because they use the same public process as Invermere to obtain permits from the provincial government to destroy deer.
Invermere Mayor Gerry Taft said the lawsuit was one of the "nastiest experiences I've ever had," and that he and his council received petitions, emails from all over the world and even death threats throughout the case.
"We're glad to have that over with," he said.
The issue of a deer cull in Invermere is not entirely settled, however. A public referendum on Nov. 2 will allow residents to decide if more permits for future culls should be sought by the district.
Kazakoff said he's confident the vote will vindicate his group's efforts.
"You get a few people that think they're aggressive of think they're a nuisance, but generally from the people I talk to... everybody loves the deer. I just hope that shows up in the vote," he told CBC News.

Posted by Legislate Kindness at 3:41 PM No comments:

Love them or hate them, deer in Greater Victoria is a topic that has brought out some very strong emotions in our citizens. A few letters of complaint to the CRD by some disgruntled gardeners has touched off a debate that has never been seen in the history of our region – should urban deer be culled now that some residents consider them a nuisance?

The nuts and bolts of such an undertaking have become onerous. What levels of government should take financial responsibility for a killing program, should culling be decided as the best “management” practice? How much input should taxpayers have in the process? Do the majority of taxpayers agree that killing is the way they want their tax dollars spent when so few residents are affected by deer? How many deer should die? Will culling in one municipality with an issue affect surrounding municipalities that have no issues with their deer?

Setting aside the political wrangling that this topic has created, there is an equally important occurrence happening here. Neighbours are pitted against one another, discussions at workplaces have become heated, and friendships have been damaged. All this before culling even occurs. Should killing begin in Greater Victoria these emotions will only escalate, creating a deeper rift among residents.

Individuals who are for killing have fallen victim to the very powerful emotion of fear. They have heard from media sources that deer carry Lyme disease, are capable of stomping our children and that they are going to kill motorists in accidents. Fear-mongering has been a surprisingly effective tool to turn people against a wild animal that they have very little to no contact with. Close on the heels of anxiety comes reprisal. An “us against them” mentality has sprung up in our city, with no need to research the actual threat, and the consequence to the deer may be the loss of their lives.

Those who believe that the deer do not deserve a death sentence are also becoming anxiety-ridden. The ease with which plans have been put into place to kill these animals has gone ahead with alarming speed, and the voices of the compassionate have been both mocked and ignored.

For more than a year now I have been out on the streets of our municipalities, asking residents to sign a petition against deer killing. I've seen first-hand what a contentious issue like this will bring out in people. I've spoken with people who love to see deer in their yards and parks, and I've had people put their faces within inches of mine and scream at me that the deer have eaten all the plants in their yards. It saddens me to see that the angry residents among us are very sure that they have a killing policy on their side, citing the deer committee recommendations as proof that culling is the only way to rid them of an irritant.

We have allowed far too much development on Southern Vancouver Island to ever return to anything that will approach a comeback to a natural environment. Pockets of Gary Oak meadows hemmed in by roads and development, where only preferred species are permitted to survive (depending on the aesthetic values of the “stewards” of the day) are yet another urban garden.

Perhaps the most alarming effect that culling deer will have will be a social one. In a society that claims to abhor bullying, children will be taught by their communities that violence is, in fact, an acceptable way to solve problems.

A safe and healthy environment should be the right of us all. The best way to achieve that is with compassion, and a non-lethal deer management approach. This is our opportunity to use the intelligence that we so often give ourselves credit for, rather than killing out of anger and fear.

Posted by Legislate Kindness at 7:40 PM No comments:

Posted by Legislate Kindness at 10:31 PM No comments: