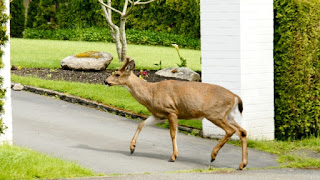 The province is putting up more than $56,000 for urban deer management in Interior B.C. — an important jurisdictional victory for municipalities, according to the mayor of Invermere.
Invermere is getting $10,200 to help cull its urban deer population. Grand Forks is getting $16,000 and Elkford is getting $10,000.
Cranbrook is getting nearly $20,000 for a pilot relocation program.
Gerry Taft, mayor of Invermere, says the money is a win for cities because it's an acknowledgement from the province about its responsibility for the deer.
"We always need permission from the province [to cull or relocate deer]," Taft said. "We always felt that the province should be at the table as the funders, that they should be helping to fund these solutions."

Taft said the funding is on a per-deer basis, with the province doling out $200 per deer. He says that covers most of the cost of the cull, but not all of it.
Invermere has been culling its urban deer population since 2011. Taft says the city's strategy has changed significantly since then; the initial goal was to reduce the population as much as possible, but the city now takes a more strategic approach, culling a smaller number but focusing on especially problematic areas.
The city has also experimented with relocation programs, tagging and moving 13 deer out of the city in 2016.
Taft says the results were mixed. The deer took to the relocation better than expected, but several have already ended up back in town.
"They were moved over 50 kilometres away from Invermere into the backcountry, [but] at least four of those deer have returned to Invermere," he said.

Wild animal culls are always contentious issues, and Taft says Invermere is no exception.
He said the relocation program shows some promise as an alternative to culling, but the costs might be prohibitive if so many of the deer return to the city anyway.
But Taft says problems with urban deer are, at their core, just as much about humans as about the deer themselves.
To that end, Taft hopes the cull will have the secondary effect of making people realize that their own actions are putting deer at risk — things like feeding deer or leaving garbage unsecured.
"It's about what humans are doing and the behaviour of humans that are attracting deer and allowing them to thrive and stay in these urban environments," he said.
With files from CBC Radio One's Radio West.


Posted by Legislate Kindness at 10:08 PM No comments:


A plan to put deer on birth control in the Victoria suburb of Oak Bay has hit a snag.

Oak Bay Mayor Nils Jensen says the B.C. government is calling for more study before it will consider sharing the cost for the plan.

Last month, Oak Bay Council asked for $20,000 from the province.

Communities elsewhere in the province have received provincial funding for deer culls. 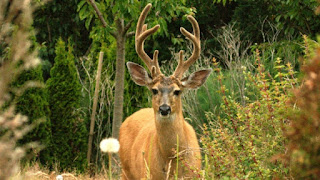 "We appear to be the only community in British Columbia at this point that are looking at a non-lethal alternative to cull for deer management," Jensen said.
"Should Oak Bay go forward with a successful fertility control program it can become a model for the rest of the province."

In 2015, Oak Bay tried a deer cull to reduce the deer population. The regional deer management pilot project killed 11 deer but drew strong opposition from the B.C. SPCA and other animal rights groups.

The current plan is to partner with a local stewardship group to trap and inject female deer with an immunocontraceptive serum.

Provincial staff say only one contraceptive drug has ever been used in B.C.and it's not currently in production, so a safe alternative needs to be identified for black-tailed deer.

Other details that need to be worked out include specifics on methods to capture the deer and administer the drug.

Jensen said Oak Bay plan should get conditional approval as a pilot project.

"These urban deer are owned by the province," Jensen said.  "They really have shown a reluctance in the last few years to really do something about it."
To be effective, Jensen said the deer fertility-control program must start three or four months before mating season in September and October.

If financial support from the province is not forthcoming, he said, the fertility-control project won't proceed.

"We'd have to go back to the drawing board for council," he said.
"Our proceeding to this point was conditional on a joint province-local government initiative."

Posted by Legislate Kindness at 11:21 AM No comments: